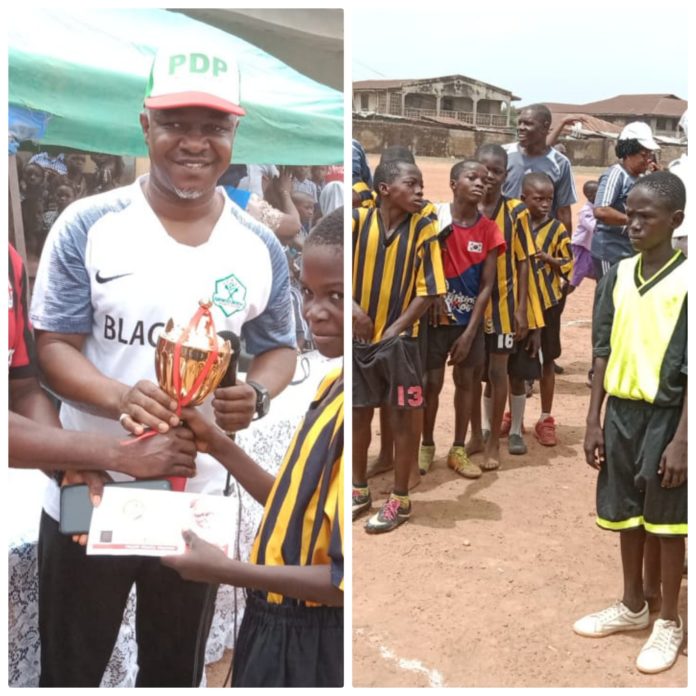 Football enthusiast and chairman, Ogbomoso United Football Club, Mr Akinwale Akinwole (aka Wolekanle), has counseled primary school teachers to give adequate support and nourish the talents of the skillful players among pupils and students of primary and secondary schools in Oyo State.

The House of Representatives hopeful who is eyeing the Ogbomoso North-South and Oriire Federal Constituency in the 2023 elections, said this while speaking at the final of the Wolekanle Primary School Football Competition, held in Ogbomoso.

During the competition, held in conjunction with the National Association of Primary Schools Game Masters, the Okeleerin Zone won the cup after defeating the Masifa Team in a penalty shoot-out, while the Agboin Zone won third place.

Wolekanle, as he is fondly called, while presenting the cash prizes to the winners, said most of the players are endowed with soccer skills that needed to be nurtured and developed to make them professionals in the future.

“My interest in sports development is simply to bring out the best among the younger generations. Majority of them are talented as you can see in their performance today and if this kind of activities continues they will grow to be our pride tomorrow.

“Already Coach Waheed Bello of Crown FC has volunteered to be training them once in a while and equally urged the teachers to also in their bit make it a point of duty to continue training them.

“Let me assure you that this will be an annual event and by God’s grace more prizes would be in the subsequent edition,” Wolekanle said.

Former chairman of the association and a retired teacher, Pastor Akinlabi Samson and other members of the group, in their remarks, commended Mr Akinwale Akinwole for the football match which they said was last played over 20 years ago.

“We are proud of you. We thank you for your interest in sports, especially sponsoring of football competition among the primary schools which happened last over 20 years ago. We are grateful and we want you to continue to support our vision in developing the younger ones in the zone,” they said.

A cash reward was also presented to the best goalkeeper and the best player at the Wolekanle Primary School Football Competition.