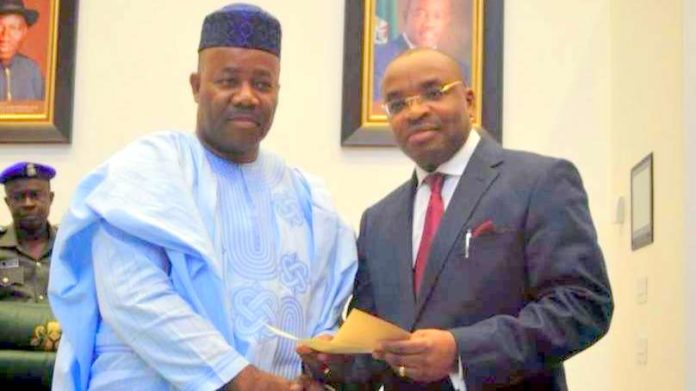 Now let me be clear. The reason for this piece is two-fold. Firstly, to call out Udom Emmanuel for the blatant and malicious lie that he met the Uyo-Ikot Ekpene Road at 20 per cent completion; secondly, Udom Emmanuel’s ingratitude and continued disdain for a man whom God used to bring him from obscurity to statehood.

For no matter how you spin the God or destiny tale, there would never have been a Udom Emmanuel as governor without Godswill Obot Akpabio.

An unknown banker, not even at the zenith of his profession, brought forward by divine accident through the instrumentality of Akpabio, should, at least, know when to stop the vile of ingratitude that has eaten his intestines since that day in August, 2018, when Akpabio chose another path.

Some of us may not be aware the extent of the battle Akpabio fought to make Udom Governor. Even when he was rejected by Akpabio’s kitchen cabinet as unsellable, Akpabio remained defiant, tasking his close childhood friend with the responsibility of fact-checking the feedback.

I remember how this friend crisscrossed the length and breadth of Akwa Ibom, day and night, dragging Udom by the tail, from one top politician to the other in this same Akwa Ibom. Believe it or not, it was the representation of this close friend that finally sealed the Udom governorship. So God decreed. But he used Akpabio. That is the irrefutable truth or is it not?

Now, when a man deploys a single-minded purpose to move a person from a mere spec to the colours of a spectacle, that man deserves some gratitude, no matter the differences. Telling lies against that man and doing everything to cause hatred for him is surely beneath the spiritual law of forgiveness we have been called on by the Almighty.

But in Udom we see the bilateral relationship between ingratitude and forgiveness. When you live in religious precepts coined for the public, you suffer gross deficit in understanding spiritual laws like forgiveness. Forgiveness is not easy because it is a spiritual call and not a religious swansong.

Now, lets rewind a little to see Udom’s lie on the Uyo-Ikot Ekpene Road. Charles Udoh, the then cmCommissioner for Information and Strategy, had, in an interaction reported by the media, in August 2018, alleged that Akpabio left the road at 42 per cent completion.

So when exactly did 42 per cent become 20 per cent? Why was it necessary to remove a whopping 22 per cent from the completion statement? Isn’t this deliberate distortion, borne out of sheer wickedness and the will to be petty?

But pettiness is ingrained in the psychology of the Akwa Ibom governor. Pettiness would stand in the way, even when her action is to be commended. And that is because pettiness represents the sum of aggregates imbued in her leadership.

So congratulations to you Udom Emmanuel for finally completing the Uyo-Ikot Ekpene Road. But learn to move on.

Akpabio has since moved on. He sleeps well. He is not a saint. He is human. He made mistakes like us all. You were definitely one of his mistakes.

But he has since found forgiveness for himself and for you. I pray the Almighty elevate you, Udom Emmanuel, to the spiritual realm of understanding forgiveness. Once again, please accept my hearty congratulations on completing the Uyo-Ikot Ekpene Road.