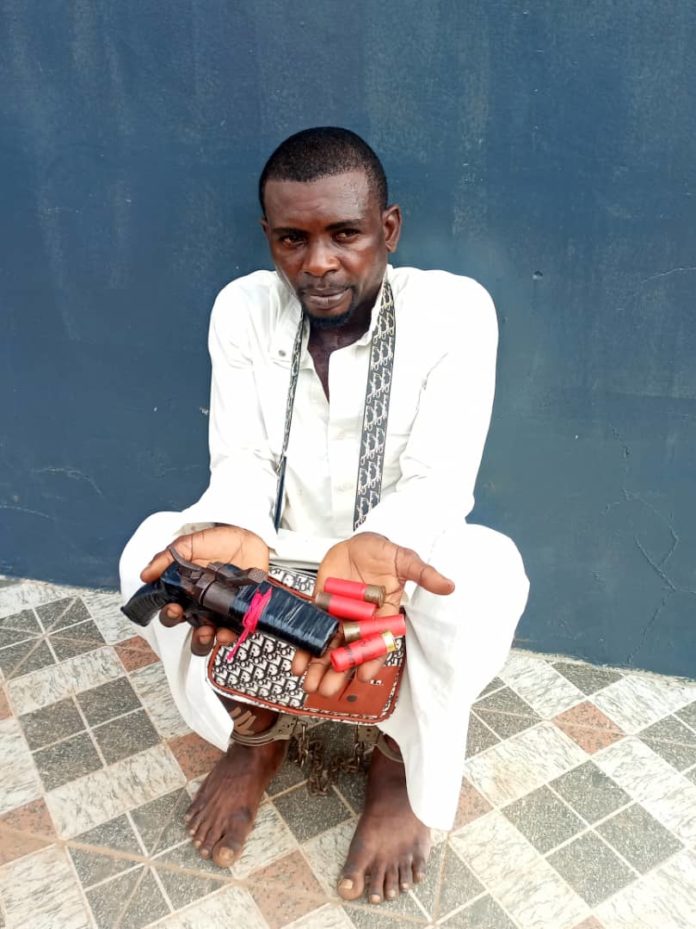 Advertisement
Christian Peter, a suspected notorious cultist and armed robber, has been arrested by operatives of the Ogun State Police Command.
The suspect, who has been on the wanted list of the state police command, was arrested, on Wednesday, during a routine patrol of the Mowe/Ofada Road by the DPO, Mowe Division, CSP Folashade Tanaruno.
As stated in a release by the state police image-maker, DSP Abimbola Oyeyemi, the Divisional Anti-Robbery team were on patrol when Christian was sighted with a waist bag in the premises of an hotel at the Olororo Area of Mowe.
It was further stated in the release, AZ:5310/OGS/PRO/VOL.7/109.
11/05/2022, that the suspect, on sighting the policemen, attempted to escape but he was quickly obstructed and apprehended.
Oyeyemi said, upon a search conducted on Christian and the waist bag, a locally-made double barrel pistol loaded with four live cartridges was recovered from the suspect.
The Ogun Police image-maker further revealed that Christian Peter was one the hoodlums terrorising the Mowe/Ofada axis of the state in recent time.
“The waist bag in his possession was searched immediately and a locally made double barrel pistol loaded with four live cartridges was recovered there in. He is one the hoodlums terrorising Mowe/Ofada axis in recent time,” he stated in the release.
Oyeyemi said the state Commissioner of Police, Mr Lanre Bankole, has ordered the immediate transfer of Christian Peter to the State Criminal Investigation and Intelligence Department for discreet investigation.
Advertisement