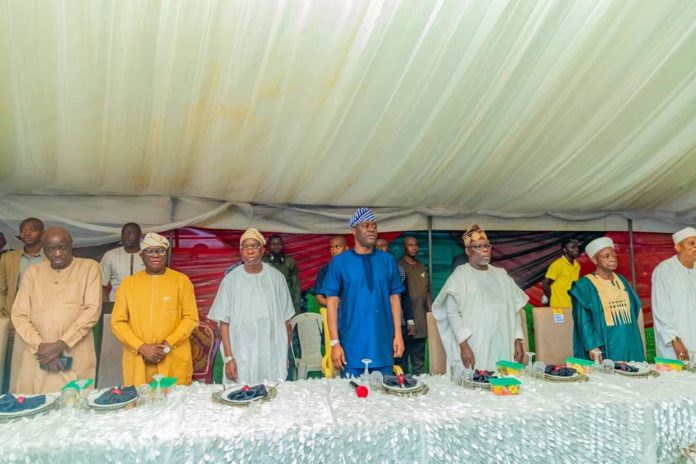 Oyo State governor, ‘Seyi Makinde, has called for citizens participation in government business, adding that anyone can point out and call his attention to mistakes of his administration for prompt action and correction.

The governor declared that he would not shy away from correcting any mistake made by his administration, alleging, however, that some people are hellbent on spreading fake news to cause disaffection in the state.

He stated this while hosting Muslim faithful to Iftar at the Presidential Lodge of Goverment House, Agodi, Ibadan, adding that the people of the state should not be swayed by the antics of some people he said wanted to spread falsehood.

Makinde, in a statement by his Chief Press Secretary, Mr. Taiwo Adisa, said would continue to sustain the religious and ethnic harmony being enjoyed in the nooks and crannies of the state.

The governor also assured that he would not allow anyone to create religious disharmony between Muslims and Christians in the state.

Makinde said: “I am very happy tonight to host you all to this Iftar and pray that we shall celebrate more on earth. Even, we will celebrate that of next year in this same place by the grace of God.

“In Oyo State, the spirit between Christians and Muslims shows that no one can succeed in creating religious disharmony in our midst.

“I will say it once again that despite being the governor, I am not the richest, wealthiest or all-knowing. It was only the will of God that came to pass, which brought me here.

“So, what this means is, if you observe that the government is making a mistake, point it out genuinely to us and we will look at it together.

“There are some people who are hellbent on spreading fake news to cause disaffection in the public. I can assure everyone that we will not shy away from correcting any mistake we are making.

“If whatever decision we take is wrong, we will correct it. So, I beg you to always call our attention to whatever mistake you think we are making.”

Makinde also pledged to the address contending issues raised by the Muslim Community about the management of Teaching Service Commission (TESCOM).

The governor, however, added that he is satisfied with the works of both the Commissioner and Permanent Secretary of the state Ministry of Education.

“I have also noted what you said you observed about TESCOM. Most times, I try to balance things out but in certain instances, I try to look at what some people have to offer our government.

“The Commissioner for Education and Permanent Secretary of the ministry are both Muslims. They are doing what is expected of them and I am happy with them.

“I was reviewing some of the things we have done and I have seen instances where a Muslim was pushing for balancing in a particular area.

“So, since the issue of TESCOM is a concern to the Muslim community, we will address it. There is religious and ethnic harmony in Oyo State, despite the confusion some elements are tying to create for us.

“When the clash at Sasa happened, it would have snowballed into a serious crisis that would have even consumed Nigeria, if God had not taken control.

“So, I want us to be circumspect. If anything bad wants to happen to Nigeria, it will begin from South-West, particularly Ibadan.

“Let me remind us that ‘Operation Wetie’ started here and gradually snowballed into civil war and we are still battling the challenge till today because it was the civil war that led to the over-centralisation of power at the federal level.

“Also, the restructuring we have been clamoring for can be traced back to all these past events. So, when some people think they can create confusion and cause disharmony so that they can take over power by force, sometimes, generation yet unborn can later suffer from the outcome of such act.

“So, I really thank you all our fathers and mothers here for your cooperation,” Governor Makinde stated in the press release.