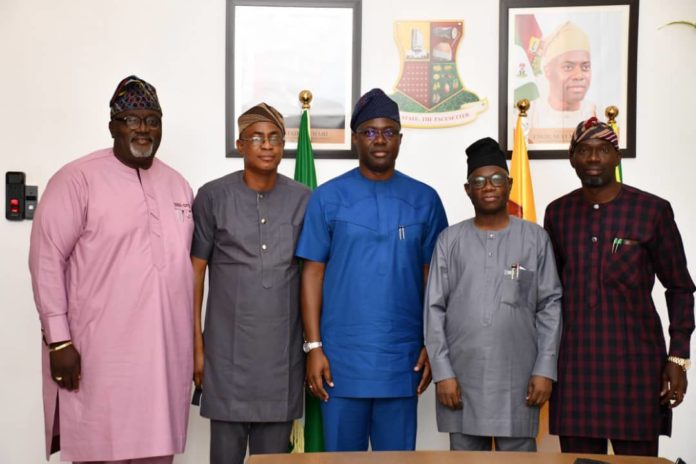 Federal lawmakers elected on the platform of the Peoples Democratic Party (PDP) from Oyo State have passed a vote of confidence in Governor ‘Seyi Makinde over what they described as unprecedented achievements of his administration in the last two years.

The PDP national lawmakers equally commended the efforts of the government in tackling the wave of insecurity in the state.

The senator representing Oyo South Senatorial District, Senator Kola Balogun, who spoke on behalf of his colleagues during a courtesy call on Makinde in his office, said the visit was meant to congratulate the governor on his tremendous achievements since 29 May, 2019.

As contained in statement by the media aide to the governor, Mr. Taiwo Adisa, Senator Balogun said: “Your Excellency, on behalf of my colleagues from the National Assembly, we have come to officially pay this courtesy call.

“We all want to use the occasion to congratulate you on your tremendous achievements in the last two years as the governor of this pacesetter state.”

He said the present administration has moved the state forward in terms of performance ranking and surpassed the past administration in terms of regular payment of the salaries of the civil servants, teachers, pensioners as and when due; provision of instructional materials to schools and other infrastructural development in the state.

“I have the mandate of my colleagues and brothers to let you know that we are aware of what you have been doing and to congratulate you for it.

“We know that before you came into office, in this state, pensioners and teachers were not being paid as and when due. Instructional materials were not given to schools.

“So, with these efforts, you have been able to move Oyo State in terms of performance ranking, because we know that, going by the record, the last administration, in WAEC, was 26 or 28. That has improved a lot.

“This is because of your commitment and passion for developing the education system in Oyo State. After all, education is the foundational bedrock of human development. So, we commend your efforts in that regard.”

Senator Balogun added that the governor has been able to bridge the trust deficit between the people and the government, adding that the state has turned to a sort of London where everywhere is lit, particularly the capital city.

He assured Governor Makinde that the people of the state will continue to support his administration and that those of them at the National Assembly will equally continue to make the government proud by complementing the efforts of the state government.

In his response, Governor Makinde said his administration is making progress everyday in dealing with insecurity in the state, adding that all hands must be on deck to secure lives and properties in the state.

He said his administration would continue to collaborate with the federal establishment to find a lasting solution to the insecurity in the state, urging the federal lawmakers not to be far away from their constituencies.

Makinde said he is looking forward to interacting with the Oyo State Caucus of the National Assembly, adding: “I want to thank you, distinguished senator, and honourable members of the House of Representatives, for this visit.

“Yes, you all belong to the PDP but I always say that players will come and go but our state will remain. I especially want to thank you because it is not about party affiliation. But in terms of providing that bridge between the state government and the federal establishment, you have done very well.

“It is only PDP senators and House of Representatives members that I know are doing things to bridge that gap. You have the interest of our people at heart and I want to commend you and urge you to continue in that direction.

“The issue that I know is a little bit touching is on security. I said last week that, even if you want to rule Oyo State in 2023, you don’t destroy the state you want to rule.

“It is very similar to somebody wanting to draw water from a well to drink and decided to, first of all, pollute the well. By the time you draw out the water, you are going to be drinking polluted water. So, we should not destroy our state.”

“Say things as they are, come to us to ask questions if things are not clear. We are dealing with the issue of insecurity in Oyo State and we are making progress. I can say that with all sense of seriousness and responsibility.

“And I want to plead with you, I may go out and take responsibility for the security situation in the state but the truth is we all have to take collective responsibility.

“We all have to play our own part-distinguished senator and honourable members, traditional rulers, the Mogajis, local vigilantes, voluntary policing sector, town unions and the rest-must play our part to secure our state.

“We don’t want to keep passing the buck and that is why I always claim responsibility. It is not because I am super-human but because I don’t want buck-passing. I want to be held accountable.

“We have to share the responsibility and that is the only time that we can beat our chest that the issue of insecurity in the state will be a thing of the past.

“When we came in, we strengthened all the things we met on the ground. We bought patrol vehicles for the SRS, Operation Burst, and others. There is no federal security agency that operates in the state that we have not done one thing or the other for them to be more effective.

“We may be in opposition to the party in power at the federal level but we are not out to politicise the issue of insecurity. We are ready to find a lasting solution to this problem. So, we are partners in progress.”