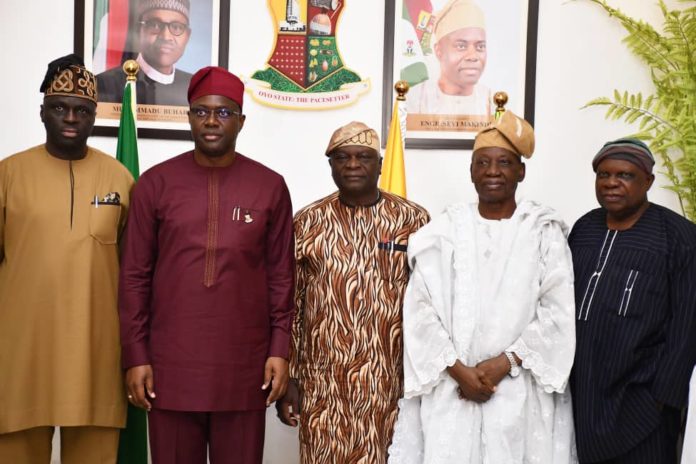 The five-man reconciliation committee of the South-West chapter of the Peoples Democratic Party (PDP), on Thursday, submitted its report to the Oyo State governor, Engineer ‘Seyi Makinde.

The reconciliation committee, led by a former governor of Osun State, Prince Olagunsoye Oyinlola, was instituted to reconcile all aggrieved members of the Peoples Democratic Party (PDP) in the South-West Zone.

Governor Makinde, while receiving the report in his office, said tlit came at the right time, stating that the PDP needs to get all the tendencies together, not just in the South-West, but across the country.

The governor, in a statement by his Chief Press Secretary, Mr. Taiwo Adisa, appreciated the members of the committee for the job and for their selflessness, noting that the report would be implemented in the overall interest of the PDP in the South-West zone and nationally.

Makinde said: “I want to thank the reconciliation committee for presenting the report. This is a confirmation that when elders are somewhere, they do not do their job halfway but they complete it. Actually, we have quite a bit to learn from our elders and from how you have done things in the past.

“Yes, the Congress has basically come and gone but our party is still in need of getting all the tendencies together, not just in the South-West, but even nationally.

“Between when this committee was set up and now, I believe two governors from the party’s platform have defected to the APC. A number of our lawmakers at the national level; senators, members of the House of Representatives are defecting.

“So, this report is coming at the right time for us to go ahead, look at it and still try to pull our people together, irrespective of the outcome of the zonal congress.

“The country, as a whole, is in dire need of men and women of conscience, who are thinking progressively about this country.

Governor Makinde maintained that the report would be handed over to the zonal executive of the party, who, according to him, are now the rallying point for the party in the zone.

“They will be invited; we will hand this over to them and we will probably call an expanded zonal meeting where leaders of thought can come together and put a plan in place for the South-West and how we are going to interact with other zones in the country, because we know that the National Convention is practically upon us.

“Two days ago, they brought out the proposed timetable for the activities leading to the National Convention of our party. We also have to come together, look at the position to take, relative to other parts of the country and what are our aspirations in the South-West.

“So, this is just the starting point. We will still come together and try to articulate our position, which we will sell to the other geopolitical zones in the country.”

Makinde added that the solutions suggested by the committee will lead to an “implementation that will lift our party in the zone and in the country.”

Presenting the report on behalf of the committee, Prince Oyinlola appreciated Governor Makinde for giving it the opportunity, saying the committee has been able to collate the problems and possible solutions.

According to him, the committee was put in place by the stakeholders of the South-West zone with the mandate to go round the six states of the zone and identify the areas of problems within the party.

Oyinlola added that the committee did all it could to reconcile the warring factions in all the six states within the zone and pleaded that the governor and party leaders should look into all recommendations made in the report.

According to the former Osun State governor, the recommendations in the report will go a long way to keep the party in good stead in the South-West zone.

“I want to thank you for giving us the opportunity to come and present to you the reconciliation report of the committee, which was set up around November, 2020. We have been able to collate the problems and possible solutions.

“This team was put in place by the stakeholders of the South-West zone with the mandate to go round the six states of the zone and identify the areas of problems within our party and we did all we can to ensure we reconcile the warring factions.

“We were able to achieve that by visiting all the six states within the zone. We plead that you look at the report and execute the recommendations we made as it will go a long way to keep our party in good stead in the South West zone,” Oyinlola said.

Other members of the committee who were present at the presentation of the report include Barrister Olayinka Kukoyi (secretary), Chief Saka Balogun and Ambassador Omolade Oluwateru.