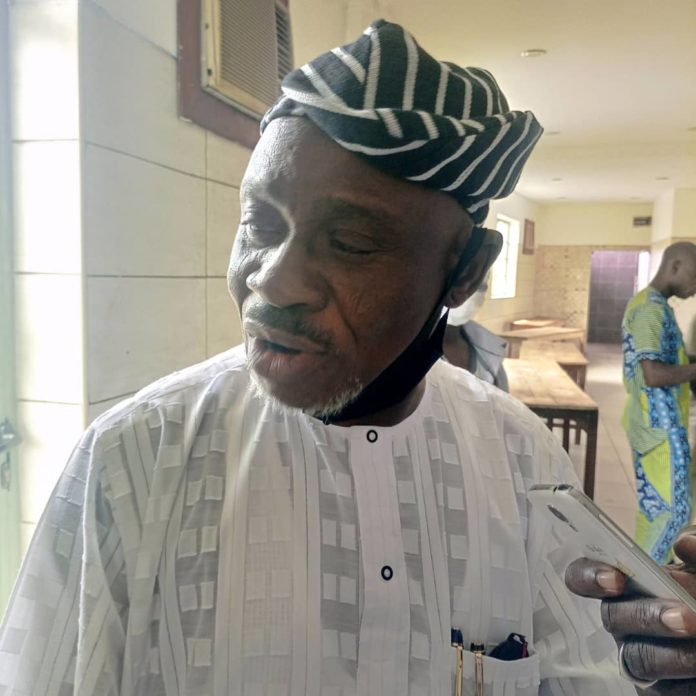 Hazeem Gbolarumi, a former deputy governor of Oyo State, is a chieftain of the state chapter of the Peoples Democratic Party (PDP). He spoke with Newscoven.ng at the sideline of a recent stakeholders’ meeting of the party in the state.

What could account for the recent meeting of the Oyo PDP stakeholders?

There are many factors responsible for the meeting. This is because we all started out like one PDP family. But at the end of the day, we have discovered that some people are calling themselves SDP, GSM, all within the party. These two groups have sidelined the real members of the PDP. If you don’t belong to either of the groups, you cannot get any appointment in the state.

So it looks crazy and we felt, what is happening? Somebody used the platform of the PDP to contest and win an election. Now your people are planning here and there, doing something else and which is detrimental to the interest of the party members in the state.

Look at the last local government election held in the staye. It was not an election, but a selection of some people who are in the SDP, the GSM or thereabout. They did not even consider the PDP members. How do we do this? Should we continue like this? It cannot continue like that.

Before the meeting, what attempt did you make to see Governor Seyi Makinde to express your grievances to him?

We made several attempts, culminating in the setting up of committees. There were many committees set up and lead by some of our leaders. We called them reconciliatory committees as they were aimed at reconciling aggrieved PDP members with the governor. One was led by the former governor of Osun State, Prince Olagunsoye Oyinlola. There was another one led by Chief Bode George. Yet, we had another one led by Dr Sala Balogun, and so on and so forth.

Did the reconciliatory meetings work?

They did not work. By the time these leaders advise them, they would agree, but our people on the other side will go ahead to do something else. The governor will agree at the reconciliatory meetings and say ‘no problem, I will make amendments and make things possible for all within the party’. But, thereafter, he will do something else. So, we cannot continue with such a situation.

What would you say the stakeholders’ meeting has been able to achieve?

We have achieved some positive steps. I don’t know if you see our communique. If you have seen it, go through it and you will be able to see what we have achieved. We want to spread this thing out so that the public can see what is happening within the PDP in Oyo State.

We want every PDP members in Oyo State to go back to their respective wards and local government areas to start PDP meetings, instead of GSM or SDP meeting or whatever. We want the real PDP to take over the entire space from the ward level to the local government level and up to the state level. That is the essence of the meeting and I am very sure that it is going to work out well.

Did you regret taking part in the coalition that brought Governor Makinde to power in 2019?

But the governor is trying to ensure governance in the interest of the generality of the people. Would you consider the interest of party members above that of the state?

Of course, the topmost priority should be given to the interest of the state. But that does not mean the PDP members in the state should suffer. Election into public offices should also be used as an opportunity to take care of party members.

So, the issue is not about governance…

But the governor publicly said there are still many appointments to be made and that there is enough to go round everybody. Why can’t you be patient?

When would that be? We had an election over two years ago and another round of election would start soon. Politics has already started this year. The governor is having just a little above one year to spend in office. So, what are we talking about? Are you saying people will not achieve anything in three years and later, in less than one year, they should come and pick something? Are you saying the party members should be made to suffer all in the name of making promises of appointments that may never come?

You earlier said you don’t have any regret over the role you played in 2019. But now you said PDP will still be in power in 2023, but you are presenting another candidate…

I don’t have any regrets but we have learnt our lessons. God will take control of everything, going forward.

As a former deputy governor in the state, what is your response to the current state of insecurity in the state?

As far as I am concerned, we have all seen it. It has happened and we just have to look for solutions. But the Federal Government is not ready for talk and dialogue. The best thing is for you to go and look for how to arm yourself with local ammunition and pistols and defend yourself against these violent people causing insecurity in the state and across the country.

But that is taking law into your hand…

Which law? Are they not taking laws into their hands with the Fulani people coming into your house to attack you? Somebody will come to your house with the mindset to kill you and you cannot even defend yourself, even as the law enforcement agents will not be of help to prevent such a thing from happening.

Let them surrender theirs too.