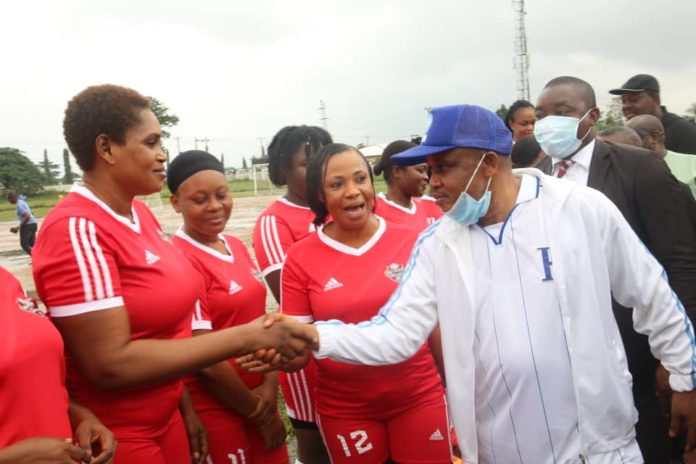 Speaking shortly before he took the kick-off to signal the beginning of the NDDC MD/CEO Cup competition, the Interim Administrator, Mr. Efiong Akwa, stressed the importance of sports in creating unity and bringing people together for the achievement of set goals.

The NDDC Chief Executive Officer said the football tournament, which would end on July 23, provided an opportunity for the Commission’s staff to come out in unity to compete among themselves.

Akwa remarked: “We have to take our staff out from their work schedule, because as the saying goes, all work and no play makes Jack a dull boy.

“We all know the importance of sports all over the world. When Nigeria was at the forefront in the fight against apartheid in South Africa, the country had to miss the Montreal Olympic Games in Canada. This was to put pressure on the South African government to end apartheid.”

The chairman of NDDC Staff Union, Comrade Anthony Gbendo, noted that the competition has been specially planned to ensure that it turns out a success, bigger and better than previous competitions.

He explained that various departments, cutting across the nine NDDC states would slug it out against each other in a five-day football contest to determine which team would emerge as the champion.

The union chairman commended the Interim Administrator for his love for sports and physical well-being of NDDC staff.

He said the objective of the tournament was to create some level of physical training for staff, encourage healthy competition outside the confines of work place and promote unity and peaceful co-existence.

He lauded the NDDC management for sponsoring the competition, stating that it would help staff to keep fit and be alert to attend to their duties.

The preliminary stages of the competition would see 8 teams for males and 8 female teams slugging it out, after which two teams will emerge, before they proceed to Port Harcourt, the Rivers State capital on July 23, for the finals.