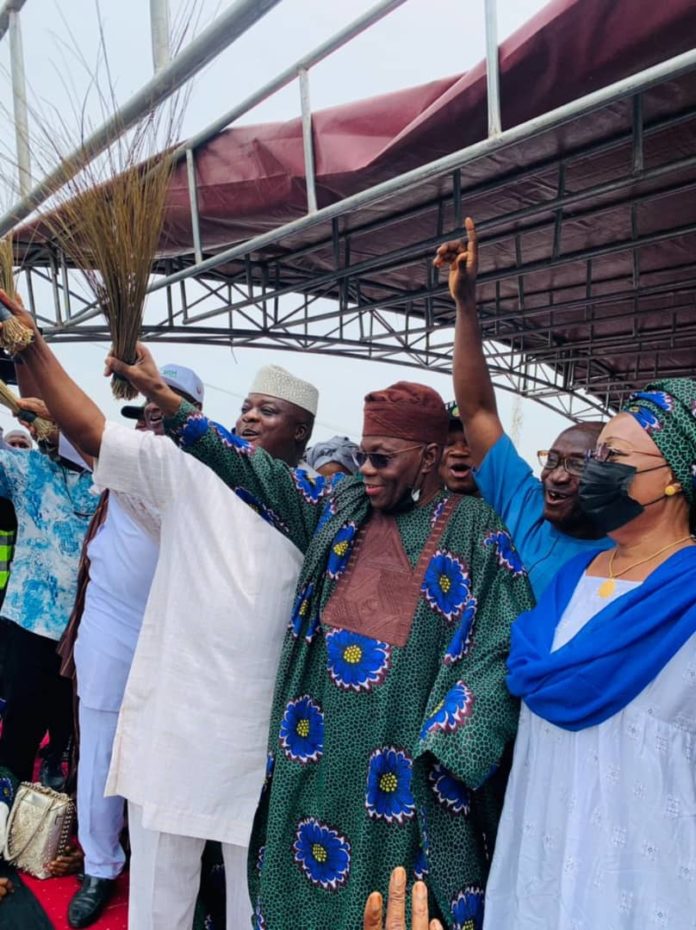 Advertisement
Senator Kola Balogun has alleged that the Light Up Oyo Project is a fraudulent project set up to serve the personal interest of some few individuals in the state.
He made the allegation at an event organised to formally announced his defection from the Peoples Democratic Party (PDP) to the All Progressives Congress (APC), today.
“They claimed they are lighting up Oyo State with streetlights. Ask them, whose company is selling the diesel they use to power the generator they use to run the streetlight. They are just serving their personal interests,” he said.
Senator Balogun also berated the PDP-led administration, under the leadership of Governor Seyi Makinde, for the pervading high level of insecurity in the state.
He alleged that hoodlums have taken over Oyo State, maiming and killing recklessly and unchecked, especially in the Ibadan metropolis.
Senator Kola Balogun also described his defection from the PDP to the main opposition party in the state as a journey back home.
He said he did not defect to the APC but “came back home” and appreciated President Muhammadu Buhari, the APC national leadership, the state chairman of the party, Mr Isaac Omodewu and other party executives and leaders for accepting him back to the APC fold.
“I didn’t decamp into the APC. Rather, I came back home. I went to the PDP on sabbatical,” the senator representing Oyo South Senatorial District said on his speech.
Speaking on his sojourn in his former political party, the PDP, Senator Balogun said he helped to secure victory for the party in 2019, when its ticket was not attractive to anybody.
“The senatorial ticket the Oyo PDP gave to me was fake, ‘gude’. Everyone else they gave it to rejected it. I accepted and secured victory for the party. Now they are making a useless case out of it,” he said.
Senator Kola Balogun was joined in the defection by several members and of his political team, the MKB Gladiators, and supporters in his former party to the APC.
Prominent among those who defected with him are Prince Adeniran Adeyanju, chairman, Providence Coalition Nigeria (Ibadan North Local  Government); Alhaji Teslim Omilabu Gandhi (former chairman Ibadan North), Alhaji Adebayo Aruna, legislative aide, National Assembly (Egbeda) and Hon Adeniyi Ajani Possible, former House of Representatives aspirant (Ibadan North).
Others included Dr. Kayode Hamzaat- Legislative Assistant (Ibadan North West); Akintoye Akinyemi, a former member, Governing Council Alayande College of Education (Ibarapa Central); Hon Adebowale Adeyoju, aspirant, House of Assembly (Ibadan North) and members of the Itesiwaju Oyo Group, represented by their president, Comrade S.O. Olawale.
Advertisement