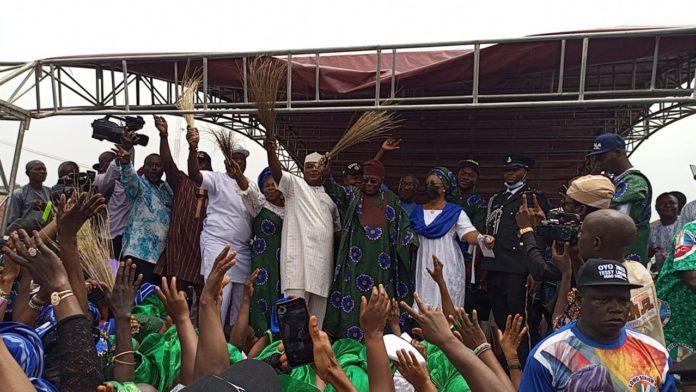 Advertisement
Dr Kola Balogun, the senator elected on the platform of the Oyo State chapter of the Peoples Democratic Party (PDP), has formally defected into the All Progressives Congress (APC).
With the development, the ruling PDP in the state, led by the Governor Seyi Makinde administration, has no elected representative in the upper chamber of the National Assembly.
Balogun, a first time senator representing Oyo South Senatorial District, took his exit from the ruling party at an event held at the state APC Secretariat, Oke Ado, Ibadan, today.
The defection followed weeks of silent war, following the decision of Governor Makinde, to deny the senator a ticket to return to the Senate for second term on the platform of the Peoples Democratic Party (PDP). 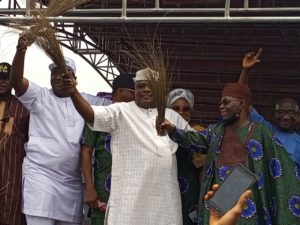 A governorship aspirant on the platform of the party, Senator Teslim Folarin, also declared his governorship ambition at the colourful event.
Senator Balogun had, consequently in a letter addressed to the PDP chairman in Ward 12, Ibadan North-East Local Government Area, resigned his membership of the party.
The senator was received at the APC secretariat by the party chairman, Hon Isaac Omodewu, the entire State Working Committee and some notable leaders of the party.
Also present at the event were Senator Teslim Folarin, Senator Abdul-Fatai Buhari, Honourable Segun Odebunmi, Honourable Hon Mojeed Olaoya, Hon Asimiyu Alarape, Hon Yemi Aderibigbe, a former Minister of Communications, Alhaji Bayo Shittu, Senator Brimo Yusuff and Hons Demola Omotoso and Lamiju Alao-Akala. 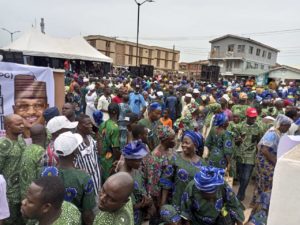 An elated Oyo APC chairman, Hon Isaac Omodewu, in his welcome remark, said he was happy that the APC is waxing stronger and better in Oyo State.
“Yes, we have misunderstandings within ourselves in the APC but we have resolved the issues. There is no more crisis.
“We are united and by the grace of God, we are returning to the Agodi Government House in 2023,” the Oyo APC chairman said.
Others who spoke at the event, including Hons Yemi Aderibigbe and Demola Omotosho, declared that Governor Makinde must be defeated at the 2023 elections in the state.
Advertisement