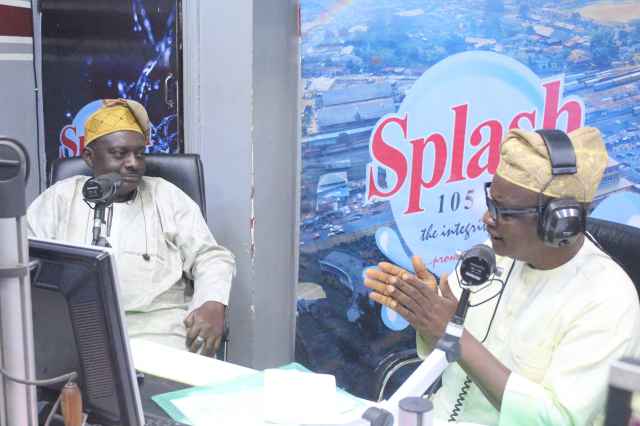 Professor Soji Adejumo, a scholar and prominent politician in Oyo State, was the guest of Olayinka Agboola on the popular Splash 105.5fm Radio Show, Parrot Xtra/Ayekooto on Tuesday. The former Oyo SUBEB Chairman made some shocking revelations about political developments during the tenure of Senator Rashidi Ladoja as governor of the state. Excerpts:

How did you react to the death of the former governor of Oyo State, Otunba Adebayo Alao-Akala?

I was pained and devastated by the sudden announcement of his death. I actually planned to see him before his death but he left unannounced. I am sure he was looking forward to his 80th birthday celebration because during his lifetime, he was a lively person. It took so much efforts for me to visit Ogbomoso.

What lesson do you think we, especially, politicians, can learn from his demise?

Everything is ordained by God, looking at the background of the late governor, he was not born with a silver spoon. When he came into the world, he was not even expecting to become a governor. He was opportune to find himself in the Nigeria Police and after his compulsory retirement, he ventured into politics and became the chairman of a local government in Ogbomoso on the ticket of the All Peoples Party (APP). Nobody gave the party, APP, the opportunity of winning any local government seat because Alliance for Democracy (AD) was in the majority and won virtually all the votes in the election.

When he aspired to re-contest for the same seat, the people of his community opposed him by supporting another candidate before he was eventually picked as the deputy governor. God really helped him and surrounded him with strong supporters during his travails. When he was denied the ticket to return as local government chairman, he was nominated as the deputy governorship candidate.

When we went to the Eagles Square in Abuja for the congress after we failed to hold it in Oyo State, Alao-Akala was not permitted to come in as a delegate. He was left stranded outside the venue and it was he that was helping us to arrange for the urgent needs of our delegates from the other end.

A night before the scheduled date of the congress, we were in late Baba Lamidi Adedibu’s room in a hotel in Abuja and his name was among the delegates’ list but unfortunately, on the day of the congress his name was expunged. Miraculously, God decided to reward him with the office of a deputy governor and he performed creditably well. And he later got to become the governor.

Yes. I can say here categorically that Otunba Alao-Akala was not part of the process that led to the impeachment of the then governor of the state, Senator Rasheed Ladoja. I was part of those that impeached him. I have no regret participating in it, and I have even spoken to Ladoja, my brother, recently about it.

During that period, we were not happy with the way he was running the government of the state and his attitude towards governance made him to be impeached. Furthermore, if constitution had permitted it, his deputy, Akala would also have been impeached with him.

I make bold to say it essentially here that Alao-Akala was not part of any meeting that led to Senator Ladoja’s impeachment and when I heard that Ladoja spoke that his former deputy was not part of those that impeached him, I gave kudos to him for saying the truth.

When Alao-Akala became the governor by chance, we spoke with him and stated our demands to him. He made governance very easy for the people and the party stakeholders, and he was very approachable while in office.

How would you succinctly describe Otunba Alao Akala?

He was human and humane in the sense that, with little prompting, he is always ready to lend a helping hand. Whenever he saw people in need and distress, he was always ready to provide succour. He was a compassionate leader and he possess good attributes that many politicians lack.

What is your plan towards the 2023 general election?

I am currently in the All Progressives Congress (APC) and by the grace of God as long as I am alive, I will continue to nurse and actualise my ambition.

How do you feel about the challenges Nigeria is currently facing under the current APC-led administration?

Looking at the circumstances we found ourselves in this uncertain situation, I will be very honest to say it here that the APC government has not succeeded in running the best practices in government.

Furthermore, looking at the unreasonable increase in tariff of electricity in the country, their charges are outrageous and not commensurate with the services being offered, it shows that we are currently in deficit of best governance and I believe that Nigerians should not be allowed to suffer based on the inefficiency of the government.

What is the way forward?

The reality is that we are all part of the system and I believe Nigerians are becoming wiser everyday, especially as we approach 2023 general election, and we must learn to vote, based on principles.