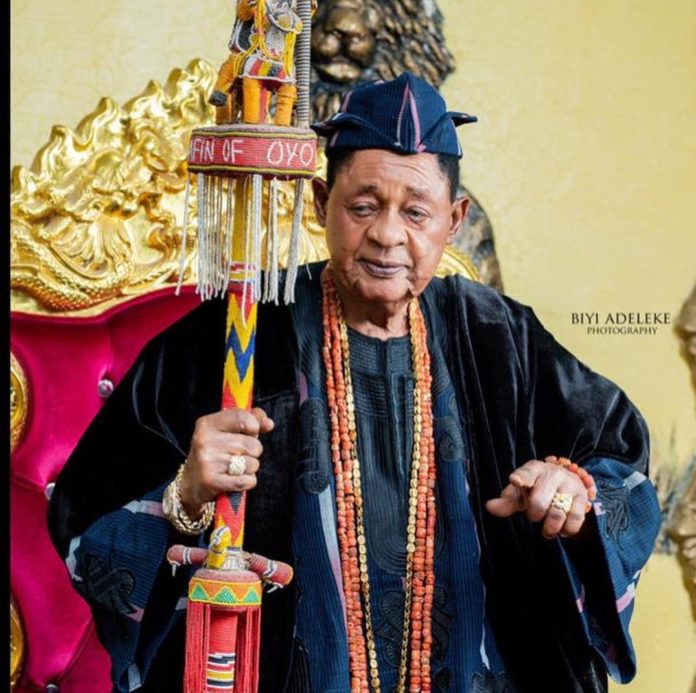 Since penultimate Friday that Alaafin Oba Lamidi Olayiwola Adeyemi III joined his ancestors, Oyo Town has become a Mecca of sorts for the political class, government functionaries and culture enthusiasts, among other sympathisers.

A lot have been written to showcase his talents, remarkable achievements on the throne and historical developments that characterised the 52 years reign of the late Alaafin of Oyo.

Being the Mogaji of the Adeitan Lineage of Alaafin Atiba Dynasty, I write this tribute as a sacred duty. Oba Lamidi Olayiwola Adeyemi III, the Alaafin of Oyo, among other kings who are direct descendants of Oduduwa, the progenitor of Yoruba race, none was his equal when it comes to fighting for the unity of Yoruba at home and in the Diaspora. Before his passage at 83, late Oba Lamidi Olayiwola Adeyemi III often visited other traditional rulers to re-unite, preach unity among Yorubas and in the spirit of brotherhood.

He would be remembered for his intervention and peaceful resolution of boundary disputes among several Yoruba communities, including Ife/Modakeke, Erinle/Ofa and Iwo/Ile Ogbo among other intra and inter-communal crises that had threatened the unity among the Yoruba in the past.

The late Alaafin of Oyo was very courageous and knew how to deploy power diplomacy to fight and protect the interest of other Yoruba traditional rulers. If not for him, a lot of opportunities the traditional rulers are enjoying today would have been denied them. In fighting his personal battles or the cause of the Yoruba race, Alaafin knew the time to strike and when to retreat. He was truly a master strategist.

The secret behind the successes achieved by Alaafin during his reign were largely made possible by his oratory power, his writing skills and grasp of techniques of bargaining, negotiation and lobbying. When others were losing their heads, the late Alaafin of Oyo knew how to keep his own intact.

Since modernity had usurped the raw powers of the traditional rulers and with the constitutional democracy in practice, the late Alaafin of Oyo was well respected and adored throughout his life time, not because of his power of dexterity as a professional boxer, but his mastery of basic principles of law and judicial precedents. Sometimes, one may presume that probably he was a trained attorney giving his grasp of law, judicial processes and court proceedings.

Being a custodian of Yoruba culture and tradition, one thing that classified the late Alaafin of Oyo mostly was his deep sense of history. He was a consultant and tutor to several renowned historians. At age 83 he retained his serenity, composure and memory alertness, unlike many of his age group that suffer from amnesia and other diseases relating to old age.

When one look at the emblems or insignia of royalty, especially the crown, sceptre beads and other ornaments apart from distinctive clothes the late Alaafin often wore at formal occasions, his sense of fashion as a king is incomparable to any other king in Yorubaland. To some of his admirers, late Alaafin of Oyo was rightly described as a fashionista.

Now the curtains had been drawn on the reign of Oba Lamidi Olayiwola Adeyemi III. Following his departure, we need to begin thinking of ways to preserve his speeches, essays, reports and other palace records. We should not make a mistake of losing these monuments. The late Alaafin dedicated his life and reign to the preservation of Yoruba culture.

For his efforts not to be in vain, there should be a strategic and concertee effort to create a special monument, archive and museum in memory of the late Alaafin of Oyo. Dr Festus Adedayo recently aptly captured that “nothing could gladden the heart of Alaafin in the bosom of his ancestors where he holds court right now than preserving him.

In my own opinion, the best way to commit all that Alaafin stood for into the memories of generation yet-to-come is to curate and jealously prepare to move all his personal belonging and his paraphernalia into a museum, preferably to be built in the Oyo Palace. This would be a tourist attraction centre and research centre for Yoruba cultural studies.

Oba Lamidi Olayiwola III was not without flaws, but most times the choices he made as a king was often dictated by the exalted stool of Alaafin. If he had not taken some of the critical decisions he took as the Alaafin of Oyo during his reign, probably the stool would have become relegated and the prestige associated with the exalted Office of the Alaafin diminished.

I have no doubts that the past Alaafins would have received Oba Lamidi Olayiwola Adeyemi III with pop and pageantry, funfair in recognition of his absolute commitment to the promotion of Yoruba culture, traditions and for the honour given to the Stool of Alaafin during his reign.

While praying for God’s guidance for the Oyomesi on the selection of a new Alaafin, I also pray for the repose of the soul of late Oba Lamidi Olayiwola Adeyemi III. The Yoruba and people of Oyo will miss Alaafin greatly for his benevolence, sound intellect and for standing tall among the traditional rulers in the country.

•Mogaji Afolabi of the Adeitan Atiba Dynasty writes from Oyo.