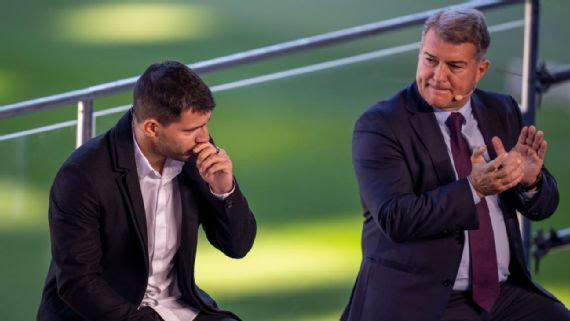 Argentine football star, Sergio Aguero, has announced his retirement from the round leather game due to a heart condition.

He announced his retirement at a news conference on Wednesday, joined by Barca President, Joan Laporta.

The 33-year-old star has not played since the end of October as his last match was against Alaves, when he was taken off the field during the first half.

“This conference is to announce I have decided to stop playing professional football. It is a very difficult moment. The decision I have taken for my health; the problem I had a month and a half ago.

“I have been in good hands with the medical staff. I made the decision 10 days ago after doing everything possible to have some hope of playing on. I am very proud for my career. I always dreamed of a professional career since the first time I touched a ball at 5.

“I want to thank Atletico Madrid, who took a chance on me when I was 18, and Manchester City – everyone knows how I feel about City and how well they treated me there,” he said.

Aguero joined Barca on a free transfer in the summer from City and his first goal for Barcelona came in at the Clasico defeat to Real Madrid.

Speaking further on his retirement from football, he claimed that he is okay at the moment but it was difficult.

“I feel ok right now. Obviously the first two weeks were really difficult. When they did the first physical test on me, the medical staff told me there was a very big possibility I would not be able to continue playing.

“I am still processing everything. Then they called me to tell me it was definitive. Right now, I am ok but I know it was difficult,” he said.