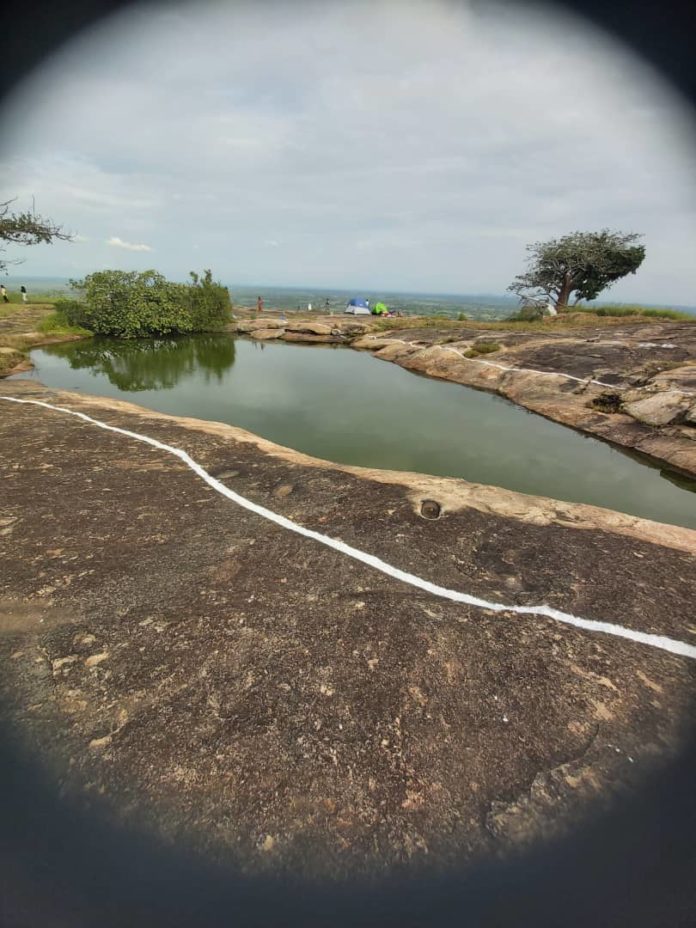 Ado Awaye is a sleeping agrarian community in Araromi Local Council Development Area (LCDA). The LCDA was carved out of the Iseyin Local Government Area of Oyo State.

The state government, in collaboration with the Ado Awaye Tourism Heritage Development Initiative (ATHDI), drew global attention to the community when it hosted the 2021 World Tourism Day Celebration, on 27 September, 2021.

Gathered at the 246-step Festival Arena, Foot of Ado Hill for the celebration were government functionaries, traditional rulers, stakeholders in the tourism sector and a host of others from various parts of the state and beyond.

The event was an opportunity to showcase the tourism potentials in Ado Awaye, an ideal community for travelers and tourists interested in the rich cultural history of a people with ancient heritage.

The Ado Hill, said to be the initial settlement of the Ado Awaye people, houses many cultural and historical spots and mountainous rocks, connoting different pieces of natural arts, making the community a tourist delight.

The most popular among these spots is the Iyake Suspended Lake, said to be the only natural suspended lake in the world. The lake, a natural splendour and a body of stagnant water sitting atop a mountain, is a place of mystery, power, beauty, pride and fun.

The Alado of Ado Awaye, Oba Ademola Olugbile Folakanmi, Makuledoye II, Asoludero, in his book, “Iyake Suspended Lake, The Pride of Africa,” writes extensively on the origin of the lake, and its acclaimed mystical powers.

The traditional ruler said the lake is a mystical, emotional, medicinal and spiritual water body, adding that it took its name from a crying mother who, for being barren, drowned inside the lake.

The lake is about four metres in diameters and the odourless water, which is green in colour at sight, is clear when fetched into a container. The Iyake Suspended Lake, says Oba Folakanmi, “is the mother of all other attractions on Ado Hill.”

On the hill is the ancient Ladebo Cave, believed to have been a place of abode for the people during the war period. It was said that it can conveniently accommodate about 500 people at a time. 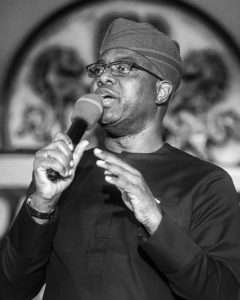 There is the Elephant Tree, a mystical tree, made up of the tangled trunk of a fallen tree and which look like the head and trunk of an elephant. It is believed to be a powerful spiritual tree around where true destinies are discovered.

Standing majestically, on its own, on a flat surface part of the hill, is the Ishage Rock. It is a giant boulder, cladded in a very clean white wrapper, symbolising fertility. Many women were said to have become mothers by praying around the rock.

There is the Iyaalaro Lake, named after a local dye-making woman. There is a valley called the Verge of Death and Life, with a wide and deep crack which separate one part of the hill from another.

On the Ado Hill is the Adventure Forest. Oba Folakanmi told Newscoven.ng that it is about two metres long. It has been mapped out for adventure walk and to be dedicated as a groove for African arts.

Feet of Elders is another wonder atop the hill, consisting of about 100 footprints engraved on the hill. They were said to be the footprints of community ancestors who walked over the mountain to protect the people.

There is the Opon Ayo Local Game spot, a creative and relaxing tourist place. A proposal is said to have been made to introduce artificial local games at the spot, to improve the tourist potentials of Ado Awaye.

On the apex of the Ado Hill is the ancient Alado Palace, housing a sacred forest and a site. The ruins of the ancient palace and other sacred sites around it are a delight for potential tourists.

Beyond the fanfare that attended the World Tourism Day celebrations, it is saddening to note that, besides the Iyake Suspended Lake, which made Ado Awaye to be popular globally as a tourism centre, the community cannot boast of any socio-economic and infrastructural development.

The town is in the backwaters of development; it lacks basic amenities. The people of Ado Awaye have been living without electricity for more than three years. Potable water is not accessible, even as recreational facilities, hotels and guest houses are lacking.

In a chat with Newscoven.ng, Ms Bukky Ojo, the Canada-based founder of #Canada Participate, a story-telling platform, said developing Ado Awaye is a prerequisite for any idea of generating revenue from the abounding tourist potentials on the Ado Hill. 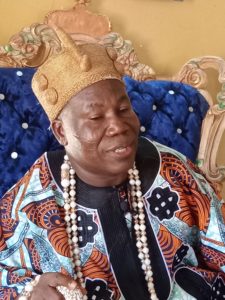 The Ekiti State-born tourism enthusiast, lamenting the lack of socio-economic facilities, said: “The Oyo State government should be the first to contribute to the development of Ado Awaye. First impression matters. For us to be able to do that, we need the government to inject into Ado Awaye.

Another enthusiast, Chukwuemeka Uzodinma Onuoha, the CEO of #Yesboss Grill, Lagos, acknowledged the immense revenue derivable from the Iyake Suspended Lake, if Ado Awaye is well taken care of.

He told Newscoven.ng: “As a nature enthusiast, I believe our natural habitats must be conserved appropriately. It is unfortunate that people at the helms of affairs do not recognise the potentials in harnessing our God-given gifts to bring peace and prosperity to our country.

“My interest borders on exposing the realistic contents of tourism and that is why we went there [Ado Hill] and experience it first-hand and not to rely on make-believe stories.

“It gives me joy to receive feedback from people around the world about the wonderful things I have taken them through the lenses and, one day, they will want to come and experience it.”

Onuoha also attested to the mystical nature of the Iyake Suspended Lake. “It is enough to bring millions of people to the mountain annually. Trust me, if you are a faith-based believer, there are no prayers that cannot be answered at the banks of the bottomless suspended lake,” he said.

Indeed, in the underbelly of the sleeping agrarian community lays a tourism site with a great potential to enhancing the standard of living of the people of Ado Awaye and immensely boost the Internally Generated Revenue (IGR) of the state.

As affirmed by Oba Folakanmi, there are immense benefits derivable from tourism, viz-a-viz increased revenue, job creation, infrastructural development and improved cultural exchanges between foreigners and the citizens.

The newly-constructed Moniya-Iseyin Road, a project initiated and completed by the Makinde-led administration, has greatly reduced the journey from Ibadan, the state capital, to Ado Awaye to just a little above one hour. This is a plus in the bid to attract investors and stakeholders alike to the community.

Beyond that, the town earnestly yearns for electricity, potable water supply and good hotels/guest houses, among other amenities. These will reduce unemployment; lead to an improvement in the social-economic life of the people; and Ado Awaye will attract more tourists, to and for the eventual benefit of the state. 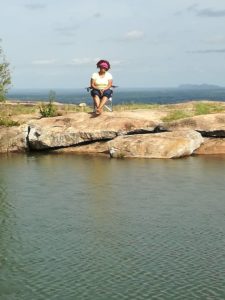 The stairs to the Ado Hill are in dire need of reconstruction to encourage hiking, a basic essence of mountaineering. Installing functional escalators will also make access to the mountains easier.

The Alado of Ado Awaye declares: “A country that relies on tourism for a big percentage of her revenue should invest a lot in infrastructures. If a country wants more and more tourists for visitations, it means that safe and advanced facilities are necessary.

This fact is not lost on the Oyo State government. Governor Seyi Makinde, speaking at the 2021 World Tourism Day, stressed the role of tourism as a viable alternative to oil and other sources of revenue. Makinde, in a message delivered by his Special Adviser on Tourism, Honourable Ademola Ige, said his administration is ready to work with investors to develop the Ado Hill.

Undoubtedly, Ado Awaye, through its natural endowments, has the capacity of turning around the economic fortunes of Oyo State. It has been said that the wonders on the Ado Hill can contribute 50 per cent to the revenue of the state.

Expectedly, the government should facilitate the development of Ado Awaye and harness its tourism potentials. Well-placed and influential individuals, indigenes and non-indigenes alike, should also be ready to contribute their own little quotas towards making the town a tourism haven.

The town is blessed with prominent indigenes who have excelled in their various fields of endeavour. They can be found in all sectors, and in politics. These people can use their position and influence to facilitate the development of Ado Awaye. 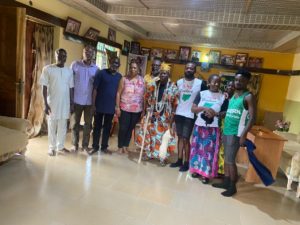 There are also Pastor Gbemiga Olakunle; Prince Leke Adelere; Pastor Tunde Shittu (Carbon Cor); Dr Emmanuel Oluwadare; a member of the state House of Assembly, Honourable Dele Adeola; a former chairman of Araromi LCDA, Barrister Eyitayo Olakunle; the immediate past caretaker chairman of the LCDA, Mr. Timothy Ogunleke, and chairman, ALGIO Chapel of the Oyo State Council of the Nigeria Union of Journalists (NUJ), Alhaji Kunle Kareem, among a host of others.

Ado Awaye will soon draw, yet, another large crowd unto itself. Plans are in the offing to host a cultural festival, the “Iyake Festival 2021: Camping Experience on the Ado Hill” in the first week of December.

One can only hope that, ahead the festival, all stakeholders will work hand-in-hand with the Alado of Ado Awaye, Oba Ademola Folakanmi, and attend to the aforementioned basic needs of the community.

The state government, investors, other stakeholders in the tourism sector, prominent indigenes and friends of Ado Awaye should pick up the gauntlet and work for the socio-economic and infrastructural development of the town.

Doing this will harness and unleash the potentials lying waste atop the Ado Hill for the benefit of the people of Ado Awaye, a huge tourism gold uncut; and provide a leeway for the Governor Seyi Makinde-led administration that is seeking for a departure from dependence on oil economy and Federal Allocation.

My Journey With Alao-Akala

My Passion For Power Bikes My Source Of Income-Lawee