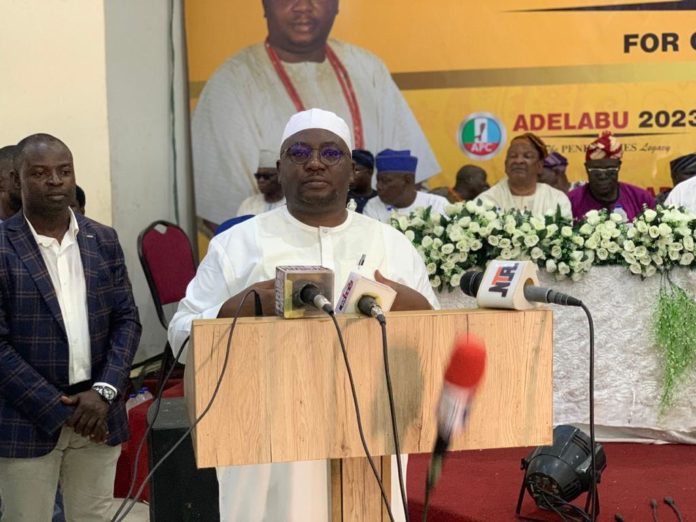 Chief Adebayo Adelabu has reaffirmed his commitment to the realisation of his governorship ambition on the platform of the Oyo State chapter of the All Progressives Congress (APC).

This was as he that declared he is contesting the 2023 governorship election to reclaim the lost pace-setting glory of Oyo State.

The APC governorship aspirant made this this known while speaking at a media parley held at the Adebayo Adelabu Foundation Secretariat, Jericho, Ibadan, earlier today.

Adelabu, in his address, described event as “My Declaration Of Commitment To The Cause Of Human Progress”, adding that it is a commitment and determination which stemmed from his conviction.

He said his ambition was to enrich politics with ethics and mix knowledge and professional competence with experiences in the service of humanity within the state and the interdependent world.

“I’m a man whose history or past is not shrouded in any shady business or deal. My past to the present is like an open book before all of you.

“And without being immodest and with all sense of decency and humility, I have been an excellent performer in everywhere I have served and my records are there for public scrutiny.

“I am a staunch believer of transparency in governance with zero-tolerance for corruption and governance by utter propaganda with nothing concrete to show for it.

“The last three years have provided me the sober opportunity to review our state of the nation, as it concerns Oyo State.

“After this introspection, I come to the humble conclusion that our dear state can be better than what we have at the moment. This is definitely not the best we can offer at the Pacesetter State.

He said he obtained the Governorship Expression of Interest and Nomination Forms in order to rekindle his commitment to serve the state with the best of his effort, garnered over time in the corporate and business worlds.

He said he would formally declare his intention on Monday, 16 May, 2022, after he would have completed all processes, as put in place by the APC.

Adelabu said his mission, if elected in 2023, is not about advertising regular payment of salary as achievements, but to put government business where it should be in the service of humanity in Oy State.

“I have observed the deficiencies of the present Oyo State government, being led by Engineer Seyi Makinde. These deficiencies point unerringly to an unspeakable lack of understanding about what is called government business.

“Government business is not a trade which any man does for his personal emoluments or aggrandizement. It takes society for its basis and reason and experiences for its guide.

“It takes society for its basis because it is the centre towards which people gravitate for collaboration and cooperation in order to achieve progress and happiness.

“This is the reason why the business is divided or expanded into Ministries, Agencies and Departments (MDAs) in order to serve humanity.

“Unfortunately, but really, the current Oyo State government is failing daily and woefully on fundamental departments of government business.

“His government has enthroned thuggery and hooliganism as the official controllers of Oyo State. The indigenes and residents in the Pacesetter State can not sleep with their two eyes closed, talkless of doing businesses of life with peace and progress.

“The Excellency of Government is no longer excellent in Oyo State in the light of our sordid performance in the environment, education, health, security and agriculture sectors, among others.

“Our hitherto neat environment has become sanitary eyesores. Heap of refuse is everywhere in the medians of majority of roads in the blessed City of Ibadan.

“Education is far from the excellency of this government. Public schools have become mangers for goats and animals despite the recorded fact that this governor attended public schools.

“The teachers are unmotivated but this government thinks the exterior satisfaction of salary can give motivation to teachers. What a messy scene in the affairs of Oyo State public.

“Health services are terribly on perpetual decline. Doctors and other health officials are demotivated on account of lack of working materials.

“Others in the Ministry of Agriculture are comfortable watchers of films on the offices computer systems because of lack of motivation.

“Water is an essential part of hygiene and sustenance of life. It is only less important than only air. In fact, water is central to the dignity of every man and woman.

“Our taps have shamefully gone dry with rich people resorting to uncontrolled sinking of boreholes, an expensive and geologically unfriendly venture; and the masses relying on water from various sources which are mostly contaminated and harmful,” he said.